Foraging Beaded Samphire and some mud sweat and cheers I had a chance to taste Beaded Samphire (Sarcocornia quinqueflora) recently. Also known as Bead Weed, Beaded Glasswort or Glasswort, this succulent occurs along the coast of Australia and New Zealand.

We were on a bit of an adventure when this edible plant was pointed out to me... 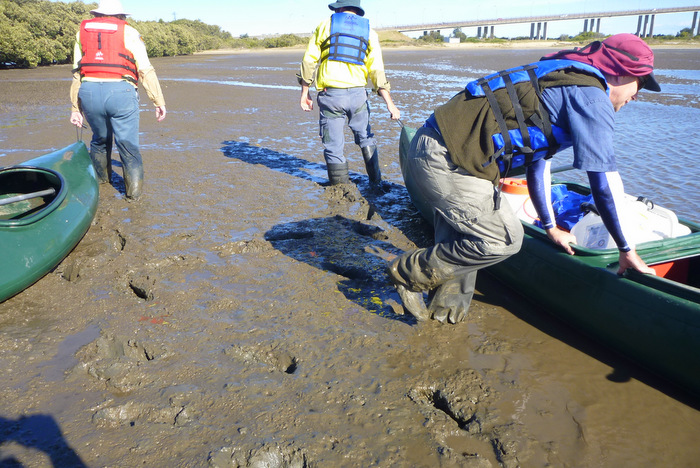 We participated in a National Parks and Wildlife Service volunteer adventure called 'Mud Sweat and Cheers'. We kayaked to a remote section of Hunter Wetland National Park and helped with much needed weed control. It was a fun adventure and I'll definitely be participating again next year.

To find out about this and other National Park adventures in NSW keep an eye on the Wild Wild World website. There's some great school holiday activities coming up. 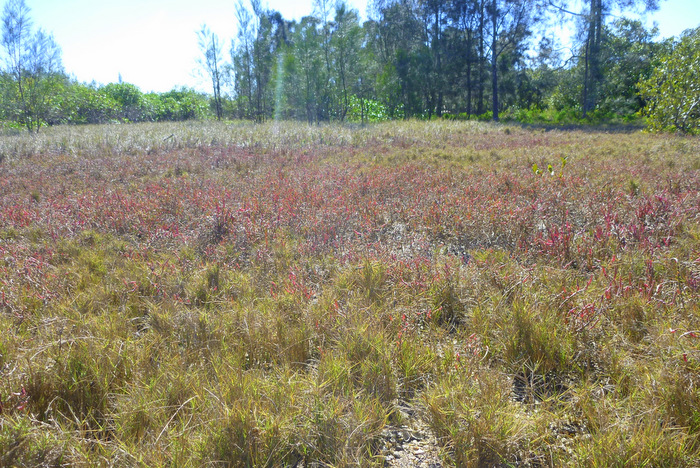 The Beaded Samphire (the bright red seen above) grows within an ecological community called Coastal Saltmarsh. Coastal Saltmarsh occurs in areas that are intermittently flooded by medium to high tides and the plants are specially adapted to highly saline environments (saltier than the sea). 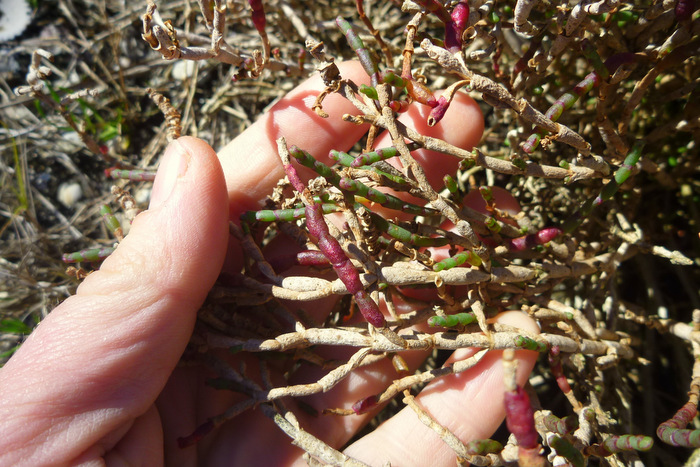 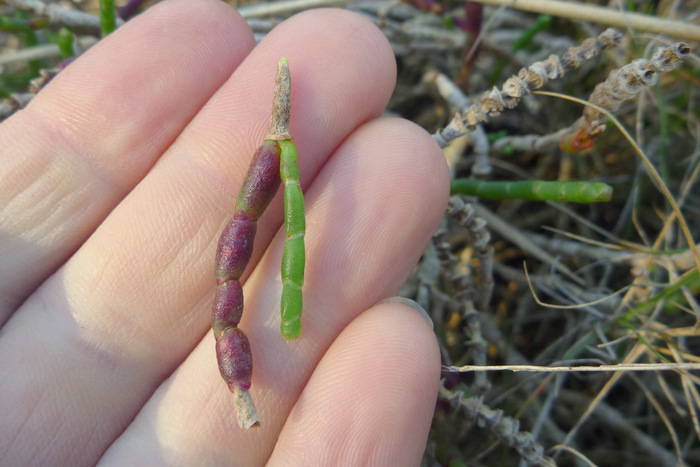 As you can imagine given its preference for super salty environments, Beaded Samphire tastes - salty.

I only tasted this little bit. Not only did it not taste very nice, I was in a National Park where its illegal to pick plants and the plant is part of a threatened ecological community which is protected from activities like picking and clearing.

So Beaded Samphire is something I'll mentally file under survival knowledge rather than forage regularly. If I'm ever in the unfortunate and unlikely situation of being stuck in a coastal environment and super hungry I'd eat Samphire fresh or blanch small lengths of the new growth, or if I happened to have some vinegar on hand I'd pickle it. It's apparently most tastiest when steamed or blanched and is described as delicious, crunchy and slightly peppery. Although, it appears there's some variation between species in palatability. Loads of websites rave about how delicious Samphire is - but what is called Samphire in the UK or USA is a different species to what we have in Australia and New Zealand - Sarcocornia quinqueflora. The stems of S. quinqueflora has a fibrous woody core that makes the plant much less appealing as a vegetable or pickle.

Have you been foraging lately? 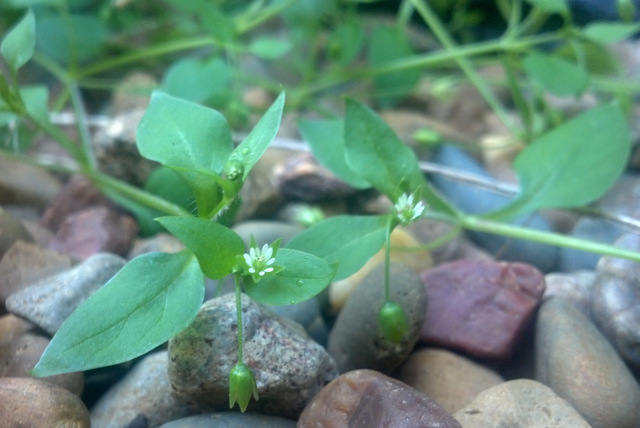 I've been noticing Chickweed (Stellaria media) absolutley everywhere recently. In the garden at the park, in the school garden, along the footpath, and all though our backyard.

Chickweed is a common garden weed that can be found growing in good moist soils in the cooler months. 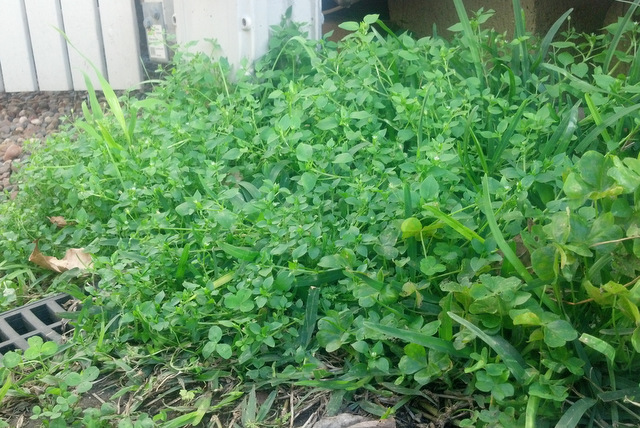 If you are an enthusiastic gardener you have probably been weeding it out and tossing it. But it's too good to toss. 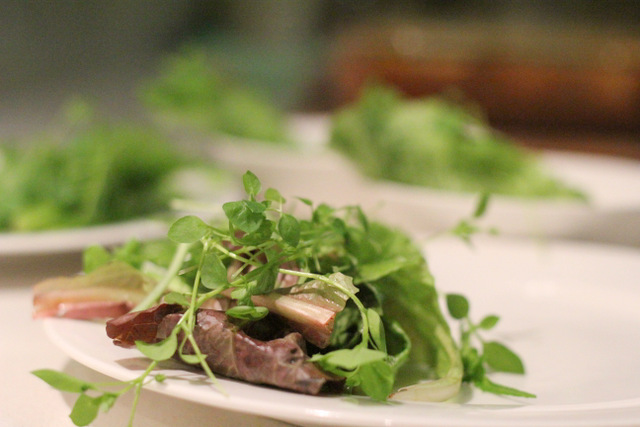 Chickweed has a lovely delicate flavour. Last week I added it to our salad greens. You can also make chickweed pesto or add it to sandwiches. While I'm talking about delicious - the dish you can't actually see in the background above was Frugal and Thriving's Kangaroo cottage pie topped with pureed cauliflower. Yum! It's going to become a regular meal around here while cauliflower is in season.

Chickweed is good for you

Chickweed is highly nutritous, being particularly high in Vitamins A and C. It is also a good source of iron and antioxidants.

Identifying Chickweed is easy once you know what to look for. 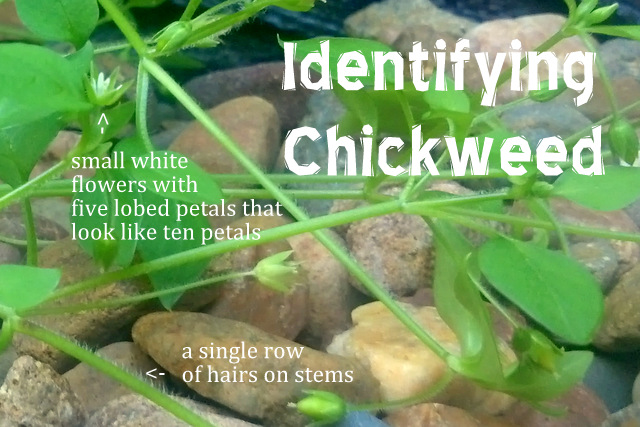 Chickweed has small white flowers. Each flower has five petals that are deeply lobed which makes the flowers look like they have ten petals.

The stems also have a single row of hairs which will distinguish it from its many look-alikes. 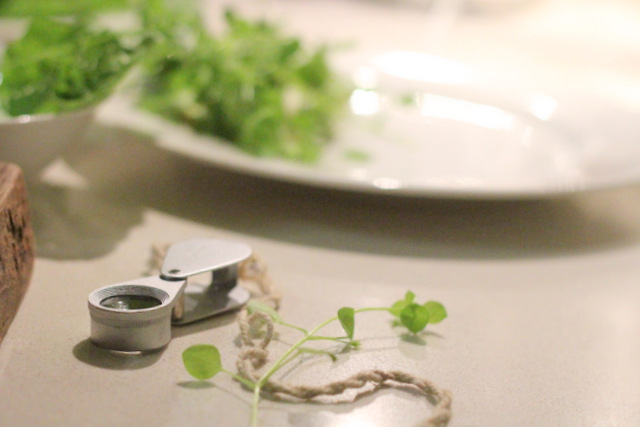 The hairs are pretty small so you will need to look closely to see them.

You might initially confuse Chickweed with Petty Spurge, but Petty Spurge is easy to distinguish by its milky sap.

Have you tried Chickweed? Have I tempted you to eat your first weed? I spotted some native raspberries a few weeks back when on a bushwalk. I tasted a few but found them rather tasteless. 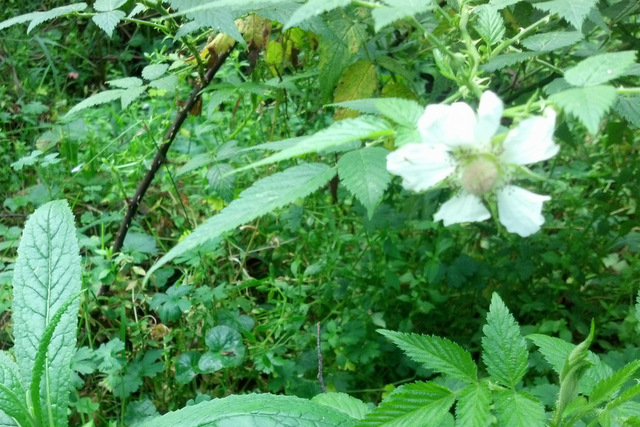 Back home I learnt that what I'd tasted was probably Rubus rosifolius, commonly known as Native Raspberry or Rose Rose-leaf Bramble.

It's described as having 'edible but insipid' fruit.

Yep, that's what I tasted.

But apparently there's other Australian native raspberries that taste good

The Small Leaf Bramble (Rubus parvifolius) apparently has fruit that 'varies immensely in quality but when it's good, it's very, very good'.

A tea made from the leaves of Molucca Bramble is known to relieve upset stomachs.

The gorgeous Atherton Raspberry (Rubus probus) is so good its commercially cultivated and sold as a punnet fruit and widely grown as a garden plant.

There's actually 10 native raspberries known within Australia - but thankfully all have edible fruit, so you don't need to worry too much about working out which Rubus species you have. Although - for the super keen you can even get an interactive CD ROM which will help you identify any species of Rubus presently known to occur in Australia (including the numerous introduced Blackberry species).

Have you noticed or even tasted native Raspberries? 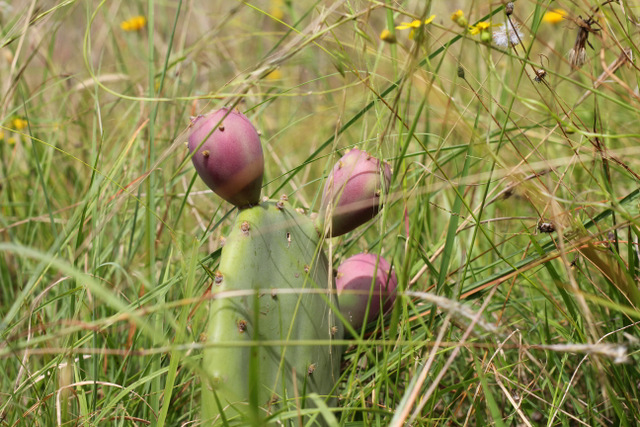 A while back I learnt how ‘NOT’ to forage Prickly Pear. I spotted a few Prickly Pear cactus in fruit while on a picnic and excitedly decided to pick the fruit for dessert. I knew the fruit was edible, but that was all I knew. Sadly my lack of knowledge didn’t stop me. 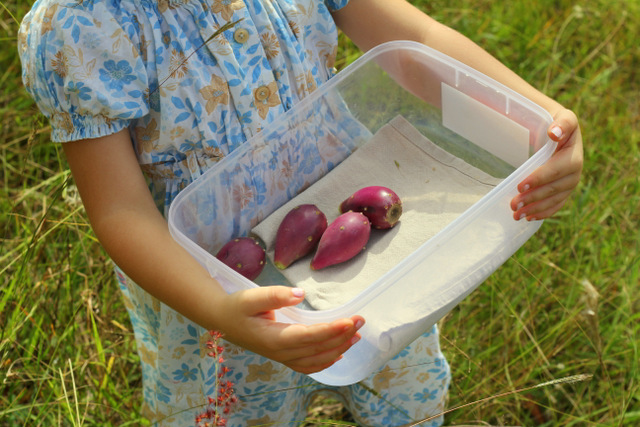 I grabbed the container that our picnic lunch had been in and proceeded to collect the fruit with my bare hands. I quickly learnt that this is not how to collect Prickly Pear fruit. The name Prickly Pear is very apt.

Prickly Pear fruit are covered with hundreds of tiny prickles, which I've since learnt are called glochids. They look harmless enough (in comparison to the huge spines present on Prickly Pear pads), so I thought I could carefully brush them off, but before I knew it I was covered in them. They were in my hands, all up my arms, and on my clothes. Everything I touched, including other people, was contaminated with these tiny vicious persistent prickles. They irritated my hands and arms for weeks.

I've since learnt that the most effective way to remove glochids is to first use tweezers to remove clumps of spines followed by the application and removal of household glue. 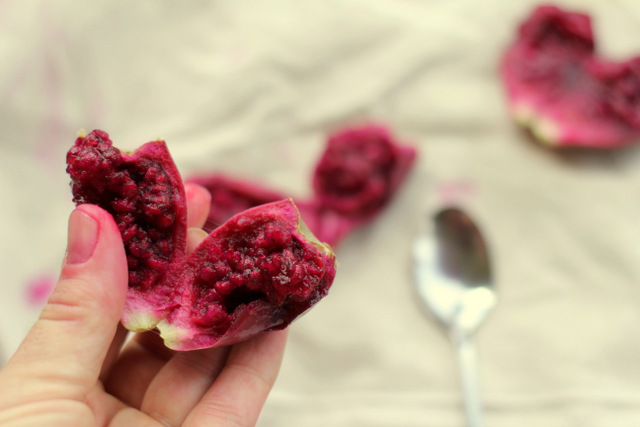 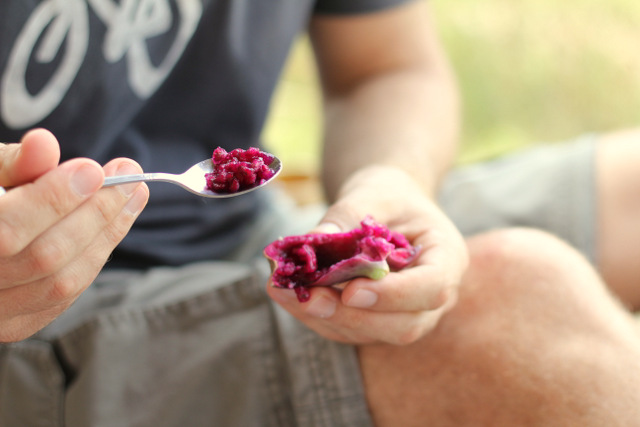 We ate the fruits despite the prickles, scooping out the flesh our with spoons. They weren't very sweet and were full of hard seeds which were too small to spit out but too big to enjoy eating. Apparently the fruit is supposed to taste like a cross between all-natural bubblegum and watermelon. Perhaps they weren't ripe enough and perhaps we found a particularly seedy variety?

Realistically, I'd probably only eat raw Prickly Pear fruit again if I was starving.

How I should have harvested Prickly Pear Fruit

What I should have done is picked the fruit using a pair of tongs and taken them home for processing. Once home I could have removed the prickles by rolling them around in some sand until the prickles dropped off or used a small gas burner to burn them off or stabbed them with a fork and scrubbed them with an old toothbrush.

I'm keen to try Prickly Pear pads, also known as Nopales. They can be eaten like a vegetable and are popular in mexican cuisine. I'd remove the spines using a knife and the nodes of glochids using a potato peeler. I'll probably try Root Simple's simple approach to cooking them: cut them into strips, boil them for five minutes to remove the mucilaginous texture, and pan fry. Apparently they taste a little like green bean or aspargus.

If I ever found huge patch I might even consider trying some of Root Simple's four ways to preserve Prickly Pear Pads.

Prickly Pear (Opuntia stricta) is a cactus shrub that is relatively easy to identify. There's some good images here to familiarise yourself with how it looks.

It may be confused with other Opuntia species, but apparently other Opuntia species that are naturalised in Australia aren't similar. For example, Tiger Pear is smaller and has sausage-shaped segments, Coral Cactus has a corrugated surface, Drooping Pear and Velvet Tree Pear are trees rather than a shrub (i.e. they have a trunk).

So if you are in Australia and see a cactus growing as a weed that looks like Prickly Pear, it most likely is.

Prickly Pear is a weed in Australia

Prickly Pear is a weed that occurs all across Australia. It used to be a major problem in large areas of northern NSW and central Queensland in the early 1900s. It's now found over a larger area but is rarely a problem due to a couple of effective biological control agents that were released in the 1920's and 30's. Interestingly, one of these is the Cochineal insect, which is used to make a red dye/food colouring. I wonder if the bugs can be simply squashed to make food colouring?

Are there any risks involved in foraging Prickly Pear?

Obviously the spines and prickles are a little annoying and worth avoiding (see comments above regarding preparation).

Another risk is that the Prickly Pear plants may have been sprayed with a herbicide. Prickly Pear is now mainly controlled through biological control, but if extra control is needed they can be pulled from the ground or they can be sprayed with herbicide. To minimise chances of foraging from sprayed plants, I'd avoid large infestations and also road verges.

Have you foraged or eaten Prickly Pear? I get a buzz out of foraging for food. I love that foraged food is free, has super low food miles, and provides yet another alternative to buying food from the supermarket. It also seems absurd to ignore these local food sources. 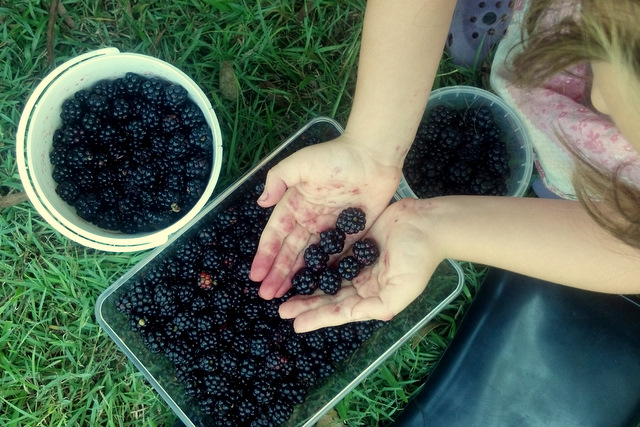 I believe there’s more to ‘the buzz’ than simply knowing the advantages of foraged food. I sense an almost primal urge to gather and forage. There are a number of foods I’m comfortable foraging, like Purslane (shown above), New Zealand Spinach (shown below), Blackberries and fruit from abandoned trees, but I’d like to expand the foods I forage. I’m particularly keen to learn more about foraging for native foods - bush tucker. As part of my quest to learn more about foraging I’ll be sharing a Foraging Friday post each fortnight – on the second and fourth Friday of each month.

Each fortnight I’ll share what I have learnt about how to forage, prepare, and cook a particular foraged food. I’ll be back next Friday to share what I have learnt about foraging for Prickly Pear.